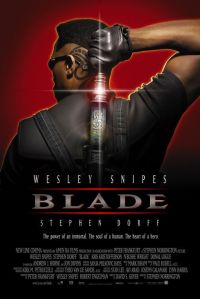 An organized vampire underworld operating in league with key human figures in a covert plan to control the world.  All that opposes them is the Daywalker, Blade (Wesley Snipes).  He was born shortly after his own mother was bitten by a vampire, and thus, inherited all their powers with none of their weaknesses, except the thirst for blood.  The serum concocted by ally and fellow “suckhead” slayer Abraham Whistler (Kris Kristofferson) suppresses this thirst, but Blade is building up an immunity to it.  As Blade tears through the vampire underworld, he moves in closer and closer to Deacon Frost (Stephen Dorff) who has major plans to cease control of the vampire nation from the “pure bloods.”  Caught in the middle of this bloody, unseen war is Dr. Karen Jenson (N’Bushe Wright).  As the film unfolds, Frost’s own plot is slowly uncovered as well as the origins of our heroes, and the potential for a cure to vampirism.

Wesley Snipes owns this entire film.  His expert martial arts skills are executed with machine-like precision making Blade into the ultimate vampire slaying bad ass.  Beyond that is the pain within.  Blade has a lot of obvious internal pain that keeps him distant from even Whistler, who is the closest thing to a friend and parent he ever had.  While Blade plays their relationship very coldly, in the end, there’s a lot of emotion there.  Blade owes Whistler everything.  In contrast, Kris Kristofferson plays Whistler like an cowboy.  He’s a real tough old bastard that doesn’t show any real sentimentality, but he’s exceptionally likable.  He’s a hard ass for sure, but with his past and allegiance with Blade, it’s difficult to be any other way.  He gives Blade the needed kick in the ass when he’s getting a bit too enveloped in his own agendas.

Stephen Dorff plays a wonderfully despicable villain in Frost.  He’s defiant, sadistic, and completely vile.  He has a lot of fun with the role, playing it up with a sick enthusiasm.  Frost is also very frustrated with the arrogant and aristocratic attitudes of the pure bloods, thinking they have the right to run everything, and tell him what to do.  His ultimate scheme intends to wipe them off the face of the planet, and bestow god-like powers upon himself.  Dorff has so much charisma that makes him deliciously evil, if even a bit annoying to some.  His henchman Quinn, played by comedian Donal Logue, is a energetic and hilarious delight.  In a film handled with so much weight, levity is so valued.  Snipes and Kristofferson also have tinges of humor in their performances, but it is easily the villains here that offer up the most.  This allows the film to not be cheesy, but instead delightfully villainous at times.

The other notable villain here is Dragonetti portrayed by the eccentric and distinctly European actor Udo Kier.  He’s an amazing genre actor with a perfect German accent and look to fit into the classic vampire motif.   He has over 170 acting credits on his filmography, and has worked with Peter Hyams, Dario Argento, and even John Carpenter on an episode for Masters of Horror.  Udo plays Dragonetti as greatly as he does in any other role, and adding a real air of sophistication to the vampire elders.

Stephen Norrington directs this film with much style, but also a lot of weight.  The source material is updated, cleaned up, and given a lot of seriousness.  Still, as stated, there’s humor and an excellent sense of fun.  Never does anything get to feeling so serious that you lose interest.  The dramatic and emotional moments are handled well, and the action sequences are shot with a lot of fun and top-notch composition.  This was easily before every action director was shooting their films with the infamous shaky-cam style.  The end duel between Blade & Frost has such speed and ferocity that you’ll be hard pressed to find a more intense one-on-one fight with this great of choreography.

Director of photography Theo Van De Sande gave the film an amazing look.  The coldness of the blues and grays goes a long way to establishing the feel of this underground world of vampires, but it doesn’t dominate the film.  There’s plenty of daytime and certain indoor scenes with a warmer color palette.  This is a needed counterbalance to avoid making the film too dreary.  Films like Underworld failed to offer such a visual counterbalance as well as a sense of levity that hurt its entertainment and enjoyment value.  Norrington and Theo Van De Sande got it right the first time out the gate.

Eight years later, I do have to say that the visual effects here don’t hold up well at all.  They look very low budget by today’s higher end standards.  Even the visual effects in Blade: The Series looked better than they do in this feature film, but for the time of its theatrical release, they were pretty good, but no great.  I can’t help but hold 1993’s Jurassic Park as a CGI standard bearer since so many films these days still fail to live up to that level of quality and realism.  Though, the makeup effects here are great with much gory texture and detail.

Mark Isham’s score coupled with a pulsating soundtrack gives this film great power and vibrancy.  It hits all the right marks, and flows with the moments to keep the film coherent in style and mood.

Now, I’ve seen mixed results with David S. Goyer’s screenwriting. Blade: Trinity was an awful mess with bad dialogue and poor plotting.  What I’ve come to believe is that the influence and vision of the directors he has worked with have geared his scripts into far higher quality territory.  In any case, this adaptation of a lower tier Marvel Comics character turned out greatly!  The final shooting script was obviously very strong, and created an excellent film.

Overall, I would call Blade a definite classic that combines elements of horror, action, and martial arts in a very fresh and intelligent way.  Remember, this predated The Matrix by several months, and honestly, any martial arts sequence in this film kicks the crap out of all of The Matrix trilogy.  Who needs ten tons of wire work and a thousand Kung Fu blocks when you’ve got some full-on vampire martial arts and swordplay ass-kicking?  Wesley Snipes definitely solidified himself as a certified bad ass with this film.  Stephen Norrington also displayed a great artistic eye and killer talent for making genre-blending films.  It’s all too bad that after his exceptionally difficult experience making The League of Extraordinary Gentlemen, he vowed never to direct another film.  But in regards to Blade, I give it a 9.5/10.  The CGI is certainly dated, and the final duel could’ve been extended for greater dramatic effect.  Still, it’s a stellar film with fantastic action and a definite dramatic weight overall.