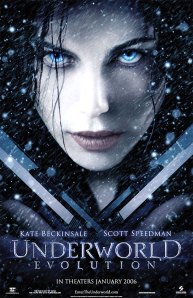 For whatever reason, I chose to give this sequel a fair chance despite my very negative reaction to the first film.  It might’ve been my extreme absence from seeing new horror films in the last few years, or just that it may have seemed a bit more developed than the first (by way of trailers and such).  Whatever the case, on its opening theatrical weekend I caught a matinee showing of it, and yes, I actually garnered some enjoyment from it.  Before I get into the critique, let’s familiarize you with the premise of Underworld: Evolution.

Eight centuries ago
unknown to humanity, a blood feud raged
between a ruling class of vampires
and a rebellious legion of werewolves
known as lycans.

Legend tells that the war began with two brothers,
the immortal sons of Alexander Corvinus

Markus, bitten by bat,
became the blood leader of the vampires.

William, bitten by wolf,
became the first and most powerful lycan.

This sequel picks up just exactly where the first film ended.  The lies about the war between vampire and lycan have been uncovered, many former allies and enemies lie dead, and the vampire death dealer Selene (Kate Beckinsale) and the first hybrid of the two immortal species, Michael Corvin (Scott Speedman), are now on the run.  Meanwhile, vampire elder Markus (Tony Curran) has been revived.  He is the very first and most powerful vampire, and he shows it from the very first minute on screen following his resurrection.  He absorbs the blood memories of the lycan doctor that was slain in the crypt, and comes up to speed on all the recent betrayals and treachery.  He goes hunting down Selene to learn all she knows, more than even she is aware of.  Markus knows that Viktor deserved the end he got, as the pre-title flashback sequence shows, but the intentions of Markus are much more frightening, volatile, and lethal than those in the previous film.  As Markus tries to move his plans forward, Michael & Selene hideout wherever possible, and eventually become more intimate with one another.  More secrets and hidden truths begin to unfold, and Markus’ ultimate plan is unveiled as he wants to create a new race forged by the purest of both vampire and lycan.  Unknowingly, Selene holds one major key to Markus’ plans, but there is much vengeance for him to reap along the way.  Ultimately, our heroes must evolve to battle this new enemy or perish in its wake.

One of the things that I first enjoyed about this sequel were the more exciting and unique action sequences.  No more are we treated to shootout after shootout, but we have much more physical combat on top of some nice chase sequences.  Every action sequence is different from the last, whether in context or geography.  It made this film much more lively and intense.  Secondly, Scott Speedman really comes more into his “evolved” character of the vamp-lycan hybrid Michael Corvin.  He’s involved in more smash mouth brawls and chase scenes.  He’s a more active member in the story despite having much less pivotal importance to it instead of riding the wild wave carrying him along to unknown destinations.  Selene still does much to protect and guide him as he becomes more familiar with what he is, but he’s not helpless by a long shot.  Also, the design of the hybrid is more evolved as well, and yes, I am using the subtitle of this film a lot.  However, it is justified because there’s a lot of evolution with this sequel.  Anyway, with a bigger budget, but not an over inflated one, this film has some upgraded effects that truly benefit the characters and story.  Corvin’s hybrid creature design is more satisfying to me as it takes on a few more werewolf characteristics, and the creature itself tends to be more animalistic.

There are fewer characters this time around, but the depth of them is much improved.  There’s more emotion here, especially with Selene.  She’s no longer some cold killing machine, trying to fight back against everything and everyone.  She becomes intimate with Michael, opening her emotions to him, and there’s no denying their love for one another.  With no other allies, Michael is all she has, and Selene is the only one that Michael can latch onto.  Without each other, I doubt they could survive emotionally or psychologically for too long.  One of the new characters is Tanis (Steven Mackintosh), a vampire historian that has been exiled for about three centuries, or so it was believed.  He’s a weasel, a real piece of scum that shouts back to the majority of the cast of characters in the previous film, but is easily more enjoyable than despicable.  Not surprisingly, Tanis has interesting ties to Lucian .  Another new character is portrayed by Sir Dereck Jacobi, a revered British actor of stage and screen.  His character is wholly pivotal to absolutely everything, and is greatly responsible for cleaning up after the messes of both the vampires and lycans.  He helps keep their underworld as hidden as possible – mainly because he’s partly responsible for its existence – but none have been aware of his existence until now.

And the new villain, Markus, proves to be quite an adversary for all, especially Selene & Michael.  He certainly has a swirl of emotions being manipulated and opposed by Viktor for centuries.  He seeks to free his brother William, the most ravenous and powerful lycan ever, and together, no one will be able to survive them.  Markus is truly frightening and indiscriminately lethal.  He knows what he wants, and will tear through whomever he must to achieve his god-like goals.  He’s not as intriguing a villain as Lucian was (who actually proved to not be the villain at all in the first film), but he still does not disappoint.  While Lucian was someone with more carefully laid plans (one part revenge, one part survival for his species) who had patience to carry them out subversively and work with a higher level of honor than those around him, Markus is purely about revenge, and has no use for being subversive.  He’s very upfront and direct with his approach to achieving his goals.  Being as powerful as he is, he has no fear, and thus, destroys whatever he wishes.  Tony Curran portrays him fantastically through and through.  I so enjoyed his performance – the strength, the confidence, the anger, the defiance – it was powerhouse.  He easily makes the movie, and he is definitely a marvelous actor I intend to pay close attention to.

The effects in this film are even more impressive than the first film.  There are a lot of effects here that you would swear are practical, but don’t seem logistically possible.  The visual effects department deserves major credit for their amazing work here!  There’s not a bad or cheesy piece of CGI here, if you can even decipher what is CGI to begin with.  In any case, this is a major visual effects achievement, and everyone knows that bad CGI can completely kill any movie (especially one with such a serious tone as this one).  Yes, the dead serious tone persists here, but there’s a couple of smirks to be had here and there.  Frankly, there’s enough depth and variation of emotion throughout the film to make it more lively and entertaining than the original Underworld.

The music of Underworld remains the same with the industrial rock remixes and such.  The score is also fantastic, and possibly a bit more dynamic than before (mainly due to the demands of the story and action).  We get a lot more action early on, and I would have to say that there is a higher degree of gore here.  It’s not a massive amount of gore, but more gruesome since Markus is a far more violent character than any we saw in the original Underworld.  There’s also less “technobabble” this time around because there’s nothing new to describe in relation to it.  Simply put, all the medical jargon and related exposition more or less applies here as well.  It’s already been established in the first film, and so, there’s no need to say it all again.  There’s ultimately less exposition overall, but there’s still plenty of back story to explore.

Basically, I found this movie enjoyable.  The action is far fresher than that in the first movie.  There’s easily much more emotional depth, allowing you to really feel more for these characters, and to become closer to them.  There’s not as much mystery this time around, and the scope of it all might seem smaller.  This is partly due having fewer characters than before, and this film takes place more outside in mountainous regions than inside the mansion where there was a lot of production designs to show off (as well as extras).  Although, I believe Underworld: Evolution makes up for it on many levels.  Also, after viewing the extended cut of the original Underworld, I believe both films are equal, but on different levels.  What one lacks, the other makes up for.  One film’s weakness is the other’s strength, and so, they even out in the end.  I believe if you melded both films together into one, capitalizing on both of their strengths, you’d have one bad ass movie, but instead we get two that are pretty damn good in their own ways.