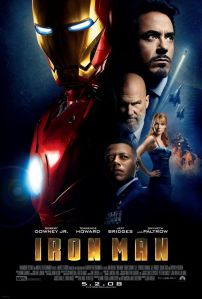 Sometimes, when you want it done right, you’ve got to do it yourself.  That’s how I feel about the Marvel films.  Until Iron Man, I don’t think anyone entirely handled the Marvel Comics properties correctly on a consistent basis, and so, it took until Marvel Studios was launched for a cohesive and high quality franchise of films to be created.  This was the groundwork, and on every level, it was a stunning success.

Billionaire industrialist and genius inventor Tony Stark (Robert Downey, Jr.) is the CEO of the leader in military weaponry, Stark Industries.  After Stark conducts a demonstration of the company’s state of the art Jericho Missile, his convoy is attacked and he is taken captive by a group of insurgents who want Stark to build him their own missile.  Instead, using his intelligence and ingenuity, Tony builds a high-tech suit of armor and a means to prevent his death from the shrapnel left in his chest by the attack.  Stark soon escapes captivity, and when he returns to the United States, he  changes his outlook on life, and begins to dedicate himself to peace instead of war.  He finds opposition and criticism from his closest confidants in business partner Obadiah Stane (Jeff Bridges), his best friend Lt. Colonel James Rhodes (Terence Howard), and his smart and affectionate secretary Peppers Potts (Gwyneth Paltrow).  Yet, when he uncovers a nefarious plot with global implications, Tony Stark dons his powerful armor and vows to protect the world as Iron Man.

This is absolutely one of the best superhero origin stories ever realized on film.  I had not been thoroughly impressed with any Marvel Comics movies before this since Blade.  Whether it was unfaithfulness to the source material, the wrong talent involved, or the wrong tone being implemented, nothing from X-Men to Daredevil to Spider-Man ever really got it completely right in my view.  Iron Man is a perfect example of handling it right.  This set an excellent tone for the full Marvel Cinematic Universe, and also reflects the tone of Marvel Comics, in general.  It can have good drama, but usually, Marvel Comics are meant to be largely fun and colorful.  Director Jon Favreau does an exemplary job meshing those ideas together in a very cohesive and entertaining film.

It’s beautiful how Favreau sets up and establishes Tony Stark here.  We get a dash of the charisma and personality followed by the awards ceremony video package detailing his history in short.  It gives you all the basics right up front in an entertaining and succinct fashion.  This style permeates the film being sharp, smart, and stylish.  It also reflects Stark’s personality.  He’s a man of sharp wit, arrogant intellect, but is irrefutably charming and fun.  I can hardly imagine anyone but Robert Downey, Jr. pulling off this diverse and engaging role.  The charming yet arrogant egotist is a major challenge, but it seems to come easy to Downey.  It’s that sense of heart and lovability he adds in there, especially opposite Paltrow, which allows Tony Stark to come off as a charismatic joy instead of a self-important jerk.  Downey is simply a vibrant, solid leading man who handles the dramatic, soul searching aspects of Tony Stark as strongly as the fun, humorous bits.  He’s compelling and electric on screen.  He makes that subtle, yet profound evolution from the self-important genius to the selfless, righteous hero masterfully.  He doesn’t just embody Tony Stark, he launches him into excellence.

Jeff Bridges does an excellent job as Obadiah Stane.  He’s an immensely diverse actor able to do the full spectrum from kind hearted hero to tough, gritty guy, and here, he gives us some taste of that whole range.  We get the upbeat, friendly guy who is very close to Tony, and can work an awards ceremony audience or a press conference with charisma and spin.  Then, we get the gradual transition to the intimidating, menacing villain.  It’s a masterful turn towards the corrupt businessman willing to sell out his company, best friend, and country for profit.  Bridges embraces all of these fascinating aspects with great zeal making Stane a very solid and smart enemy for Stark to combat.  In general, he just plays an awesome heavy.  And apparently, Bridges always wanted to shave his head for a role, and I think maybe that propelled his enjoyment of the character.

I also really love Terrence Howard.  He’s an amazing actor that I hold in high value.  As Lt. Colonel James Rhodes, he’s really a joy.  The strongest qualities are his vibrant chemistry with Downey, and the sense of compassion and honor he has.  Rhodey’s clearly a great character with a lot of depth and dynamics to offer, and I think Howard was wonderful in this part.  It’s a performance that gives us a character of potential, and while it’s unfortunate that Howard could not negotiate a return for the sequel, the character has yet to go to waste in any actor’s hands.  And of course, I’ve always loved the little tease of War Machine we get going into the third act.  It’s a great moment thrown out for fans, but also works smartly for non-comic fans.

And of course, Gwyneth Paltrow is wonderful as the sweet and smart Pepper Potts.  It’s great how Pepper brings out the heartfelt honesty in Tony, and Paltrow does that with some great subtlety and charm.  She makes Pepper this interesting person who can be very assertive and a sharp business personality, but then, get very sweet and flustered when trying to keep up with Tony’s rapid fire wit.  The chemistry between her and Downey is beautiful, and really allows for the humanity of Tony Stark to show through.

What we get here is a very strong and smart origin story that never bogs us down.  So many origin stories seem to suck up a lot of time just establishing every little element methodically before we get to see the hero come into being.  With Iron Man, the film unfolds at a tight rhythm always pushing the story and character forward to where you are fully invested in Tony Stark, and what he’s going through.  We see the man himself evolve and change his sensibilities in order to make Iron Man what he needs to be.  It is a story of redemption.  Stark is reforming his ways and becoming accountable for what his company does, and how his negligent behavior has facilitated Stane’s corruption of Stark Industries.  It’s qualities like this which make Stark one of the more fascinating Marvel superheroes.  He has a lot of bad behavior and decisions to make up for while trying to build a better, safer future for everyone.  The relationship with Pepper Potts beautifully reinforces the depth of humanity that is motivating Tony.  He wants to be a better person that saves lives instead of enabling war.

I love the motivating scene where Tony is watching the newscast of the Ten Rings having ravaged Yinsen’s hometown while he is working on the Iron Man gauntlet.  It’s that moment which triggers Stark into action as a protector doing what no one else can.  That is the moment where his purpose and path is clear.  He’s been betrayed by one of his closest friends, and sees that betrayal has lead to this level of tragedy and injustice.  He will not stand for it, and that is the scene where Iron Man is solidified.

We also get those great phases as Tony goes through the Mark I, Mark II, and Mark III armors gradually refining Iron Man.  Each one is excellently adapted from the pages of the comic book making them convincing as functional pieces of machinery.  The visual effects married with practical elements create a cohesive and seamless result.  These are top grade visual effects featured throughout this movie giving us dynamic, cinematic images that serve the story superbly.

This film has plenty of sharp, smart humor.  These moments really create the fun factor of Iron Man, and maintain the entertainment value in between the scenes of action and engaging drama.  They hit in just the right moments to highlight the well written and developed qualities of these characters.  And the dramatic qualities of Iron Man are executed with equally great skill and care.  The emotional weight and drive of this story is powerfully accentuated throughout.  Excellently directed by Jon Favreau, all of this results in a movie of great thrills.

This is just filled with wonderfully done action sequences.  They are never frivolous.  They drive the story and characters forward each time.  Stark has something to fight for each time whether it’s freedom, destruction of his back market sold weaponry, or protecting those he cares for, it all has a purpose to exist.  The action climax is beautifully done.  It has bombastic intensity and emotional stakes while all the while being fun and thrilling.  It is exceptionally satisfying.

Needless to say, Iron Man is one of the best comic book movies ever made.  The casting of Robert Downey, Jr. was brilliant and pitch perfect.  There are possibly other actors that could have done a fine job with the role, but what Downey brings is that sharp wit and charisma that instantly and endlessly entertains an audience while hitting all the dramatic beats beautifully.  Favreau was also ultimately a fantastic choice for a director bringing in a lot of those same elements from behind the camera.  This was an exciting, successful launch to the Marvel Cinematic Universe, and that little tease after the end credits of Tony getting a visit from Nick Fury drove fans crazy at the time.  What Marvel Studios has since done with this universe and franchise is an amazing achievement that is not ready to slow down anytime soon.