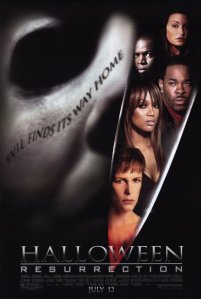 So, over twenty years later Rick Rosenthal would return to the Halloween franchise for this entry.  I honestly have never liked Halloween: H20 for a multitude of reasons, and I don’t wish to sit through it again to review it.  Thus, I was so immensely glad that this film promptly retconned the ending of that movie, and allowed for Michael Myers to live again and not die like a punk.  I know there are those who disagree with that feeling, but so be it.  While I do find this sequel enjoyable to a degree, it does have valid issues to critique about it.

For the first broadcast of the new reality website Dangertainment, a group of college students are hired to explore the ruins of the house of infamous murderer Michael Myers.  Six cash-strapped friends decide to explore the home, but what they don’t know is that Michael is on his way home back to Haddonfield after a fateful confrontation with his sister Laurie Strode (Jamie Lee Curtis).  Now, being broadcast across the internet, these unsuspecting victims will fall prey to Myers’ methodical blade.

If this movie was made ten years later, it probably would have been a found footage horror movie.  Very little would have to change to accommodate that approach, but thankfully, that’s not the case here.  I can understand why this story idea was used.  This is the eighth movie in this franchise, including Season of the Witch, and a studio is going to feel like they need a fresh gimmick to drive in audiences.  Paramount felt the same thing when they made Jason Takes Manhattan.  The problem is that these ideas are usually not all that favorable with audiences.  I love slasher movies, but I do like someone doing something fresh with the formula every so often.  Frankly, I think Halloween: Resurrection executes this idea as well as it can be.  In fact, it has some strangely honest commentary on reality television.  Dangertainment mocks up the entire Myers house with false clues about Michael’s upbringing because they know actual reality is boring.  No one would watch a bunch of people wandering through an empty house.  The head of the company, Freddie Harris, has to dress it up and create an illusion and sell it as reality so to make it entertaining.  I like that the Freddie character does come around to denouncing that illusion and the using of Michael Myers as a sound bite to drive viewership up.  It shows an effort on the part of the filmmakers to make something of the premise, which is indeed dated.  Halloween: Resurrection might be far from the pinnacle of this franchise, but it’s far more consistent than the rushed mess of The Revenge of Michael Myers.

If you watched the trailer for this you might believe that Jamie Lee Curtis had a larger role in it than she really does.  Her story is confined to the opening sequence at a psychiatric hospital where she has her final confrontation with Michael.  A quick summation at the film’s start states that Michael Myers had switched outfits with a paramedic before the last film’s climax, and it was that poor soul with a crushed larynx that Laurie decapitated.  What ensues in this opening sequence with Laurie and Michael puts the storyline to rest.  I’m sure there are fans who did not like this at all, possibly as much as I hated the ending of H20, but taken on its own merits, it is a well done sequence that is to the point.  Laurie doesn’t go out in a blaze of glory, but really, you shouldn’t set your expectations that high for this movie.  It’s just not that ambitious.

I do really like the look of this sequel.  It makes great use of atmospheric lighting.  It has the polish of a major studio feature, but Rosenthal and his cinematographer just know how give it that shadowy, moody quality.  True to the John Carpenter roots, there’s some very solid use of blues and fine steadicam work.  The video camera footage of the internet broadcast is about what you’d expect in the pre-high definition digital era.  We get more and more of it as the film progresses, and you could take it or leave it depending on your disposition towards it.  It has some effectiveness in certain sparse moments for us to see things from the characters’ point of views, which is evocative of the found footage genre like The Blair Witch Project had already shown, but there’s nothing special to witness here in that regard.

The biggest highlight of this movie is that I absolutely LOVE the score by Danny Lux.  I honestly believe it is the best score of the sequels.  Lux adds a heavier punctuation to the familiar themes, and overall, he crafts a more haunting, partially gothic aura to the film.  It’s a score that really soars far above the quality of the film it is attached to.  Regardless of what you think of this movie, you should definitely give this score a standalone listen.  It is immensely effective.  Danny Lux does an amazing job with it.

Now, I don’t think this is a bad cast.  For the most part, they do come off as fairly standard slasher film fodder, but this cast does seem like they are putting forth an honest effort.  Each one tries to make their character enthusiastic, charismatic, and somewhat entertaining.  There’s no real standout, but everyone essentially delivers a performance of a consistent, equal level.  I wouldn’t say this new cast features anything approaching greatness, but it’s good for the expectations you would likely have.

Bianca Kajlich does well in making Sara a relatable and sympathetic lead.  There’s very little to the character, same with everyone, but there’s enough of a decent, vulnerable person in her performance for it to work.  She has this internet based relationship with the high school freshman Myles.  Through that, they’ve built a foundation of trust and friendship, and it plays fairly well into the movie near the climax.  Ryan Merriman is endearing as Myles.  He’s definitely the audience’s conduit into having sympathy for the victims.  He and his friends are at a Halloween party watching the online stream of the Myers house expedition, and witness the horror as it progresses with little to be able to do about it.  Despite Myles and Sara being strictly internet pals, Merriman does a fine job creating an emotional connection between both characters.  It’s almost a shame that the film never allows them to actually see each other face-to-face.

The role of Freddie Harris is indeed filled by Busta Rhymes.  Clearly, he didn’t need to be in this movie, but I will give him credit that he doesn’t slack off.  He portrays a role that’s within his ability as a charismatic salesman, but also does a fine job with the more fearful, regretful moments later in the film.  We surely could have done without the Kung Fu fight against Michael, but at least the filmmakers did enough to set it up earlier on.  In the fiery climax, he’s certainly played up for the sake of his fans, and it does feel rather out of place.  You might as well have Arnold Schwarzenegger charge in there for as much as its played like an action hero moment.  It would be essentially the same effect.

The role of The Shape is filled by Brad Loree who I feel does a decent job.  It’s definitely Dick Warlock inspired, but not quite so rigid.  His performance is simply okay.  It doesn’t standout, the same as the rest of the cast, but it works fine for the demands of this film.  Also, while he is listed as 6’2”, I think the baggy coveralls make him appear smaller in stature than he likely really is.  The mask for his Michael Myers could have done with a little less airbrushing detail, but really, no sequel has really gotten the mask to look right compared to the original film.  I’m not sure why that’s been so difficult.

The most important question, though, is if this film is scary.  Well, it has the potential to be depending on how weathered of a horror fan you are.  Rick Rosenthal really does a lot to set a strong visual atmosphere conducive to scaring an audience.  There are plenty of spooky moments of Michael Myers lurking in the shadows, only seen in glimpses.  It certainly has moments that could scare certain people, but generally speaking, it’s not going to do much for the seasoned horror fan.  Especially ten years on, with the far more intense films we’ve gotten in this genre, regardless of your preference, Halloween: Resurrection is fairly tame.  Even John Carpenter’s original is not really an effective horror film anymore to me, but I respect it immensely on every artistic level.  It is, after all, the movie review of mine that launched Forever Cinematic in the first place.

The Halloween franchise is kind of a mess.  There are a lot of subjective ups and downs depending on what storylines you enjoy.  For me, I really liked where things were potentially going with the sixth film, The Curse of Michael Myers, mainly in its Producer’s Cut form, but so much tanked that potential resulting in Halloween: H20.  I hated that film for killing the continuity and storyline that I loved, and intending to dispatch Michael Myers in an unimaginative, bullheaded fashion.  This sequel ultimately feels like a weak whimper trying to extend the bankability of the franchise just a little further without enough ambition or unique talent to elevate it.  It just tries to be a fun slasher flick, and if you take it as that, it’s fine.  I can sit down and burn ninety minutes with it on a whim, but it’s entirely forgettable and dismissible.  Aside from the potentially divisive opening with Laurie’s death, it really plays it safe with an either fun or lame premise.  Essentially, you can take this film or leave it.  If it’s on cable, and you’ve just time to kill, it’s a decent watch.  I would like to give it a better recommendation, but knowing that there are a some far stronger films in this franchise, I can’t give it any further credit than this.