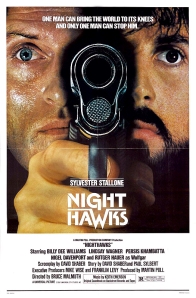 This is one of those Sylvester Stallone gems that both seems like it’s gained a respected following, but has never become a high profile hit.  It doesn’t fall into the light hearted fare like Tango & Cash or Demolition Man or the substantive drama of Rocky or First Blood.  Instead, this is a very good gritty cop thriller with a definite 1970’s aesthetic boasting a great performance by Rutger Hauer that foreshadows his acclaimed work in Blade Runner and The Hitcher.  Nighthawks has its definite merits, but surely demonstrates why it’s a lesser noted film for Stallone.

When Europe’s most feared terrorist known as Wulfgar (Rutger Hauer) explosively announces his presence in Manhattan, two elite undercover NYPD cops (Sylvester Stallone and Billy Dee Williams) are assigned to stop him before he strikes again.  However, the ruthless terrorist has other plans for the city – and the detectives – as he begins to hold its citizens in the grip of fear.

In the wake of big blockbuster successes like the Rocky and Rambo movies, and films with more flash and crowd pleasing excitement, you can understand how Nighthawks kind of flies under the radar.  It’s very grounded and much more low key.  It is also a slow building film with a focus on the psychological aspects of its main adversaries, and capturing that gritty, urban New York street cop vibe.  Still, within that context, you’ve got a very admirable crime thriller here lead by some strong casting choices across the board.

I really believe Stallone leads this film quite well.  Detective Sergeant Deke DaSilva is a solid cop who doesn’t back down easily.  He takes on crime with intensity and fierce dedication, even if it costs him his marriage or his well being.  Stallone makes DaSilva a tough cop, but one with a morality and heart.  Despite the fallout with his wife, Deke still desires that loving connection, and he won’t become the cold blooded assassin that the British counter-terrorism specialist wants him to become.  Stallone does a solid job keeping DaSilva true to who he is sticking to his principals as a seasoned cop, doing his duty, but doing it his own way.  We see him as a perceptive, smart cop that is dogged in his pursuit of Wulfgar.

As DaSilva’s partner, Detective Sergeant Matthew Fox, Billy Dee Williams entirely carries his own.  Fox can be more even tempered and flexible than DaSilva, allowing for him to keep his more passionate partner grounded and focused.  Billy Dee also has some playful moments adding a few minor moments of levity as, again, a counterbalance to Stallone’s harder edge intensity.  Still, when the situation gets serious, Fox is as solid of a cop as anyone.

Rutger Hauer has shown his talent for brilliance, and Wulfgar is no exception.  He brings a cold, calculating sophistication that forges his gravitas.  When Hauer is on in a film, he captivates your attention with a electrifying presence, and he does that here.  As Wulfgar, he can be frightening because as dedicated as DaSilva is, Wulfgar is equally so to his cause.  You know he’s a sociopathic killer who is a vehement believer in these radical causes.  He’s more than just a hired gun, and that makes him immensely more dangerous.  It’s not about money for him.  He inflicts this death and terror for a political purpose that he believes in, and he is not going to stop.  As the British counter-terrorism specialist says, “He’s only beginning.”

I also have to give some praise to Joe Spinell who portrays Lieutenant Munafo.  While his role is minimal, he’s damn good carrying a commanding weight and authority.  He mainly works opposite Stallone, and keeps the somewhat hot headed DaSilva in line very convincingly.  Of course, Persis Khambatta complements Hauer extremely well as the dangerous, cold-hearted Shakka.  It’s a polar opposite turn from her role in Star Trek: The Motion Picture, and that is largely welcomed along with her rich, beautiful black hair.

Like I said, this feels entirely like a 1970’s cop film with the gritty style, Earth toned fashions, Stallone’s beard, and sort of a streetwise funky vibe of the score.  It might be an early 80’s film, but you can find plenty of bleed over from the previous decade through to about 1983.  Considering this started out as a second sequel to The French Connection, it’s easy to see why this works so well in that context.  The pacing is methodical lending more towards the dramatic development than excitement.  The film could probably use a little more excitement to ramp up the danger and stakes in the second act, but especially for its time, this was quite good.

Now, Nighthawks surely has a few action set pieces including a great foot chase through the New York streets and into the subway.  However, it is very much a thriller built on suspense and tension.  Stallone and Hauer create this electrifying connection which drives the entire film.  The sequence on the Roosevelt Island tram is a great example of those personalities at conflict enhancing the peril of Wulfgar’s game.  His terrorism is no longer just about a cause, but a game of wits between both men.  Wulfgar toys with DaSilva, bringing him in so close, forcing the Sergeant to look him in the eye time and again, but denying him at choice to fight back.  This results in a nicely solid and taut piece of work.  The ending is superb focusing on a great deal of suspense and imminent peril, but I would think a modern audience might feel it’s not as climactic as it could be.  This ending has become the most memorable aspect of Nighthawks, and it is executed with great care and a few inspired visuals.

As I said, this is a film build as a slow boil thriller than an exciting action ride, and I feel it succeeds at that.  Surely, more could have been done to intensify the narrative and build more momentum going into its climax.  Regardless, I’ve always appreciated and enjoyed Nighthawks.  Stallone does a really solid job complemented well by Billy Dee’s supporting role, and greatly counterbalanced by Rutger Hauer’s chilling brilliance.  If you enjoy the work of either Stallone or Hauer, I definitely believe this is one you should not overlook.  Bruce Malmuth did a fine directing job here, but in a fourteen year career, he never had a breakout hit.  His only other high point was the decently effective Steven Seagal action vehicle Hard to Kill.  With Nighthawks, it’s a nicely solid film that likely won’t blow you away, but may indeed intrigue you through the high quality performances it offers.