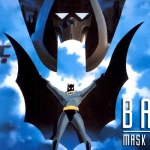 I am so glad that I did see this animated feature in theatres twenty years ago.  Being a major fan of the animated series, there was no way I couldn’t be excited for it, and it has become a very respected high mark in the DC Animated Universe.  Batman: Mask of the Phantasm does tend to get lost in the mix when discussing the best Batman or even best superhero movies because it was an animated feature.  The film didn’t perform well in theatres, likely do to a less than aggressive marketing campaign.  Even professional film critics Gene Siskel and Robert Ebert did not see it in its theatrical run, but when they did eventually watch it, they indeed loved it.  So, with this preface, I think it’s easy to deduce that this is a definite favorite of mine.

When Gotham City’s most feared gangsters are systematically eliminated, the Cape Crusader is blamed, but prowling the night is a shadowy new villain, the Phantasm, a sinister figure with a vengeful agenda.  Meanwhile, Andrea Beaumont, the one time love of Bruce Wayne’s life, returns to Gotham City stirring up memories including those of how he almost didn’t become Batman.  As all of this unfolds, and the Phantasm becomes a more imminent, lethal threat, the Joker is brought into the fold as a major wild card.  Now, can the Dark Knight elude the police, capture the Phantasm and clear his name?

If you’re unfamiliar with the 1990’s animated series, you need not worry.  This film works entirely as a standalone feature, but for those who were serious fans, there’s a great sense of expansion and increased depth that this film offers.  This is a great story interweaving all threads into an excellent Batman origin, romance, and superhero action movie.  The heart of it is the romantic and heartbreaking story between Bruce and Andrea.  It starts with so much hope and passion, but as with many of Bruce’s loves, it ends in despair and some tragedy.  It’s a beautifully crafted tale that does touch an audience’s heart, and truly shows the emotional depth and humanity of Bruce before and after he becomes Batman.

This film shows us the events leading directly up to Bruce Wayne actually becoming Batman.  I love seeing his first outing as a crime-fighter.  It’s just him in black street attire and a ski mask.  He has the skills, but not the persona, yet.  Batman hasn’t been born, and thus, the key essentially elements of intimidation and mystique aren’t in play.  He’s not the haunting creature of the night that will frighten the criminal element, and afterwards, Bruce realizes that is what he’s missing.  It’s a thrilling action scene as Bruce takes down a group of thieves, and then, hangs off the back of an open van during a police chase.  Yet, the very moment where Bruce Wayne dons the cowl and becomes Batman for the first time is a quintessential moment in my Batman fandom.  No other film has ever matched this moment for me.  Done wholly in shadows, it is a purely simple scene, but perfectly effective and iconic in my eyes.  When he turns to reveal himself to Alfred, the reaction from Bruce’s loyal and lifelong butler is pure shock and fear.  That still sends chills all over my body.

Now, I absolutely love how the stories of Bruce and Andrea intertwine.  The flashbacks to their hot and fast romance are beautiful and classy.  You can see that Bruce is ready to give up the vigilante nightlife to be happy with Andrea forever, but the shady elements of her father, Carl Beaumont’s business dealings forge an inevitable wedge between Bruce and Andrea.  Smartly, these elements are the core of the present day story between Batman and the Phantasm.  It’s also a great turn that the Phantasm’s murders are framed on Batman simply by misidentification.  This forces the Gotham Police to begin a manhunt against Batman, but strongly true to his character, Commissioner Gordon refuses to be apart of it.  He knows that Batman doesn’t kill, and that little moment shows the bond of trust between Gordon and the Dark Knight.  It’s only a shame that that is Gordon’s only scene in the film.  Every aspect of this story flows organically and tightly.  With a 76 minute runtime, it could move at no other or better pace.

By no doubt, Kevin Conroy has been the definitive voice of Batman for over two decades now for legions of fans.  Whenever I read a Batman comic book, it is his voice that I hear as Bruce Wayne and Batman.  Conroy reflects all the best qualities of the character from the upbeat playboy, the serious businessman, the dark, brooding man in the shadows, and the powerfully imposing Dark Knight.  The most important thing is he brings life, depth, and intelligence to Batman.  Producer Bruce Timm and co-writer Paul Dini perfectly understood the character, and throughout this DCAU from Batman: The Animated Series to Batman Beyond to Justice League Unlimited, they stayed true to the core of Batman.  The ideals of justice, humanity, and undying determination have always thrived in this animated interpretation.  Beyond anything else, we see the world’s greatest detective at work, which is something none of the live action films have ever fully embraced.  Batman unravels the mystery of the Phantasm and these crime bosses with cunning and perceptive intelligence.  Conroy embodies all of these subtle, inspiring, and engaging qualities of Batman with a lot of heart and care.  It might only be voice work, but this still stands as the best adaptation of the character to date.

And I couldn’t discount Mark Hamill’s Joker.  Much like with Conroy, he has been a definitive voice for the character to many fans for so long, but has had real competition from great actors in this role.  I am a fan of all versions from Ceasar Romero to Jack Nicholson and beyond.  With the Joker, there’s almost no wrong way to go with him because he is such a radically unpredictable character that he could be very Romero one day and very Ledger the next.  What Hamill does is make the Joker this insane clown who will do whatever hits the biggest punchline in his own twisted mind.  He will still likely kill you, but he’s going to laugh his ass off doing it.  Hamill brings the jovial zaniness meshed with a lethal intimidation that forges a colorful maniac that is endlessly fun and entertaining while still being a major threat.

Beyond the fact that I do really adore Dana Delany, I believe she was a perfect choice to voice Andrea.  She brings a touching beauty of heart and soul to the character.  As the younger Andrea, she’s very optimistic and vibrant.  She’s a young woman with everything to love and embrace in life.  In the present day, she’s a little more heartbroken and tender.  There’s a great emotional complexity to her by the end which is very sad and sympathetic.  Delaney is a wonderful, charming actress, and she does a remarkable job voicing Andrea Beaumont.

The animation style of this feature film is definitely a solid step upwards from the series with more dramatic shading, and a bit more dynamic action sequences.  The opening title sequence even features a beautiful CGI fly through of the Gotham City skyline.  The entire series was heavily inspired by the classic Max Fleisher Superman cartoons, and that is very evident, especially with the great art deco designs.  Adapting this style to Batman pushed everything into a great film noir realm that works stunningly for him.

The main theme from Danny Elfman for Tim Burton’s Batman movies lived on in this DC Animated Universe.  They were reworked by the great, and now late, Shirley Walker.  For this feature, she makes it even more gothic and haunting with a beautiful chorus.  Yet, that’s only just the start of her stunning work.  It’s a fantastic score that rouses an audience, and nails all over the wonderful emotional beats.

And there is plenty of thrilling action throughout this movie.  The Phantasm’s stalking of mob bosses are dark, shadowy, and even a little scary.  They have a looming, ominous presence.  The film unfolds some rousing and even explosive moments at a regular interval, but they entirely flow from the progression of the plot.  Nothing’s extraneous, and it really wastes no time crashing you headlong into the action and story.  The climax with Batman and the Joker at the abandoned World’s Fair is pretty fun.  It shows the Joker’s dangerous playfulness, and creates an escalating sense of peril as he has rigged the whole place to explode.  Yet, the movie ends on the appropriate emotional beats remembering that the story is paramount, and it treats its character with due respect.

Unlike many live action movies, this animated feature was given a lot of creative freedom to its production team, and they were able to deliver a very well fleshed out, wonderfully balanced story.  This is entirely reflective of the quality that was consistently on display with the animated series and its spin-offs and follow-ups.  If you’ve never seen Batman: The Animated Series, this is a great introduction to it, and if you’ve watched and loved it, this is a gem that will satisfy your fandom.  Batman: Mask of the Phantasm is a delightful and amazing animated Batman adventure that is well worth your time.