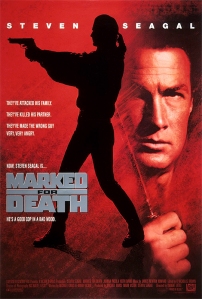 The late 1980’s was the debut of a new action star – Steven Seagal.  By the dawn of the 90’s, he had already done Above the Law and Hard to Kill, but he was still finding his footing.  However, Marked For Death finds him successfully planting his feet and launching forward with a gritty, hard edged action blockbuster.  Helmed by Dwight H. Little, who I’ve found to be a very solid director starting with Halloween 4, this delivers qualities that I find severely lacking in modern action cinema.  Here, Dwight Little demonstrates his merit alongside Seagal in excellent fashion.  This is my best friend’s favorite Steven Seagal film.  So, I hope I do it justice for him.

Burned-out after losing his partner on the job, Drug Enforcement Agent John Hatcher (Steven Seagal) hopes to find some calm and serenity by returning to his hometown.  But things at home have changed and not for the better.  Jamaican drug lords, led by a black-magic high priest named Screwface (Basil Wallace), have completely infiltrated the small town.  But this gang soon learns that they’ve met their match in John Hatcher, and all the mystical voodoo in the world won’t be enough to stop Hatcher’s wrath!

I think this would be a great double feature with Predator 2 due to the Jamaican drug gangs in both.  The spooky ritualistic and mystical atmosphere around them is very compelling.  Screwface, a hell of a weird name if I’ve ever heard one, is a scary, psychotic bad guy.  He’s right off the deep end, and like something from your darkest, twisted nightmare.  His piercing eyes are haunting, and the fact that he almost never blinks when that fiery intensity is burning inside him enhances that quality.  He masterfully builds this aura of mystique around him with a very effective and authentic Jamaican accent.  This is a wickedly awesome villain that adds so much horrific danger to this film.

I will admit that Seagal has never been a very dynamic actor, but he carries the dramatic weight and emotional drive of this film well.  Along with Dwight Little’s direction, you see the subtle emotion surface when he sits at the hospital bedside of Hatcher’s niece portrayed by Danielle Harris.  Seagal can bring some charm and light charisma to the screen in the right moments.  Then, when he gets into the heat of the action you see that ass kicking wisecracking bad ass that made Seagal the action star that he was.  He’s entirely confident and sharp in this outing showing that this is his signature style, and it couldn’t have been showcased in a better, smarter action picture.

Teaming him up with Keith David just makes everything more bad ass.  He brings a wealth of charisma and weight to Max, Hatcher’s old army friend.  He’s a tough guy who is ready to take back his community because he cares for the children he teaches every day.  So, there’s the light-hearted friend, but also, the skilled soldier ready to unleash a maelstrom on these gangs that are decaying his neighborhood.  David’s wide range of talent from the tough bad ass to the heartfelt humanity makes Max a strong complement to Seagal’s more cool, calm, reserved, yet dead-set, bone breaking violent style.

If you want to see Seagal in his most violent, hard edged prime, this is it.  These Jamaicans are ruthlessly and graphically violent, and so, John Hatcher has to be a man who is equally as severe.  The action highlights are many, but I really enjoy the shootout and fight in the high end department store.  It starts as a car chase that crashes into an awesome assault with guns and martial arts violence.  And this film keeps upping the action, peril, and explosive caliber.  As Screwface becomes more dangerous, so does Hatcher.  This is sharp, sleek action with tons of punch that will leave thoroughly satisfied and then some.  It’s all evenly paced allowing the story’s momentum to build up tightly while delivering something fresh, dynamic, and exciting at a regular interval.  It’s really damn good stuff.

I also find it admirable that this film makes a point to show that they’re not making a stereotype out of Jamaicans.  There’s a Jamaican police assistant who is an honest guy that aids Hatcher later on.  The film even takes us into Jamaica where we see the people in their vibrancy and hardships.  While it was not necessary for the filmmakers to do this, I find it the mark of a well developed and fairly balanced crafting of ideas.  If they are going to delve so much into the culture for these abhorrent criminals and killers, it adds more depth and richness to show it in context to the reality of the Jamaican people.  The score by the incredible James Newton Howard blends those Jamaican sounds and beat into the film appropriately.  His music highlights and drives a fair amount of the action, and brings the flavor of the narrative to just as much life as the visuals.

It’s oddly appropriate that the director of photography on Marked For Death also shot the last film I reviewed, Cobra.  Here, Ric Waite gets the chance to work with the wider scope format, and he does a remarkable, rock solid job.  He crafts a great atmosphere when Screwface is in his element through smoke, candles, and just excellent moody lighting.  The action is perfectly framed with some occasionally intriguing angles, and all around, it’s a greatly lit and photographed film.

And this film has an amazing twist at the end with Screwface’s perceived magic.  Not at all would I spoil this for anyone because it’s stunning moment of awe when it happens.  Just when you think Hatcher has all things vanquished, it turns around on everyone, and results in another fantastically executed action sequence.  I mean, who doesn’t love a good swordfight?  It’s one bad ass ending the trumps even what came ten minutes before, and solidifies the hard hitting, take-no-prisoners action intensity of this picture.

Pack all of this in tightly to a 90 minute runtime, and you’ve got an action film that strikes out with killer excitement.  This is undoubtedly one of Seagal’s absolute best films, if not the best.  He pulls no punches, takes no prisoners, and delivers a performance that adds some sly wit in between the emotional fire underneath and the up front bone-cracking bad assery.  Adding further to that bad ass quota, the opening sequence features a small role by Machete himself Danny Trejo.  Backed by a director who I’ve always thought deserved a more high profile career because he is that damn good, Marked For Death delivers it all.  Today, you got a lot of ridiculously over-the-top action films that devolve into cheesy and even campy indulgences.  In this film, you get a lean, hard hitting movie that never softens the blow with those silly distractions.  They can have their place in the genre, but we do not get action films like this anymore.  Not this well made, and not going straight on for the throat leaving no blood un-spilled.  Just go watch it, now!