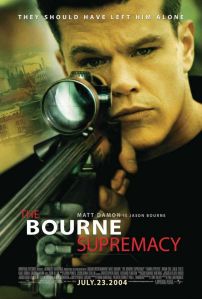 The Bourne Supremacy is one of the hardest hitting action films I have ever witnessed, and it has far more to offer than just action set pieces.  There is no fat here like most action films have.  All of its lean meat and muscle is reserved for its visceral action and dramatic emotional story.  Supremacy was loosely based on the novel by Robert Ludlum, and whenever you’re basing a motion picture off of an international best-selling novel, chances are, you’re gonna have the potential for a very meaty story.  This is definitely the truth here.  This movie is very tight, very taut, deeply dramatic, and firmly rooted in reality.  It takes everything that was built in The Bourne Identity and capitalizes on it.

It’s two years after the events of The Bourne Identity, and ex-CIA assassin Jason Bourne (Matt Damon) is still suffering from a broken mind.  His memories are fractured, and is awakened in the middle of the night more frequently than not.  Jason & Marie (Franka Potente) are now living in Goa, India, but meanwhile, Jason Bourne is about to be framed for two murders in Berlin, Germany.  A CIA team, headed by Pamela Landy (Joan Allen), is attempting to purchase classified Russian documents, but a Russian assassin named Kirill (Karl Urban) killed both men and stole the documents.  A planted fingerprint implicates Jason Bourne for all this.  Then, Kirill shows up in Goa, India to kill Bourne himself in order to erase any evidence to the contrary in framing Bourne.  Kirill believes he has completed his mission, but unknowingly, Bourne still lives.  However, Bourne believes that it is the CIA who sent a man to kill him, and this sends Jason on a dead set mission to find and take out those who he told to leave him alone.  The trail of planted evidence leads Pamela Landy to Operation: Treadstone, the elite team of assassins lead by the late Alex Conklin (Chris Cooper) of which Jason Bourne was the top operative.  Landy brings Ward Abbott (Brian Cox), Conklin’s boss, into the mix as she attempts to unravel the mystery of Jason Bourne, and why he has come out of hiding.  Now, Jason Bourne is coming down hard and fast on the CIA while the Agency is attempting to hunt down Bourne.

To their dismay, Bourne has been trained too damn good, and when Landy and the CIA believe they are completely on top of the situation, Bourne shows them that they are MILES behind him.  Bourne is like a mechanism – once you set it into motion, it cannot be stopped.  He lives up to his threat from the first film that there would be no measure to just how hard and how fast he would come down on these people if he even felt someone coming down on him.  Everything builds to explosive, intense levels to where the wrong move could get anybody killed.

All the action sequences top any of those in the first film.  Although, I have to say that director Paul Greengrass has far too much favoritism towards the notorious “shaky-cam” style of shooting.  I’ve never seen any of Greengrass’ previous work, and so, I can’t make any comparisons in that vein.  I don’t believe any blame is to be set on director of photography Oliver Wood as he handled the cinematography on The Bourne Identity in a very different fashion.  I’ve also seen numerous films he has shot including Die Hard 2, The Adventures of Ford Fairlane, Bill & Ted’s Bogus Journey, Face/Off, and TV’s Miami Vice.  So, I have to say that it was mainly Greengrass’ creative direction to use so much of this style of shooting and editing.  In some action sequences, between the shaky-cam photography and the fast-paced editing, it can become very difficult to discern what is happening.  You can literally get confused what is happening to whom.  You don’t know if that was Jason Bourne who’s getting smashed into walls or the other ex-Treadstone assassin.  Bad lighting is also to blame as some sequence take place in backlit locales making the actors bleed together.  This is my only gripe with the film, and despite its abundance, this film is just too intense and powerful to knock it down because of that.

This film’s car chase sequence is, at least, twice the sequence of the first film’s.  Mainly because it is the climactic action sequence of the film as Jason Bourne & Kirill turn the streets of Moscow into a demolition derby the likes of which you have never seen!  The car crashes are violent and visceral, and anyone who has ever been in a car crash – like myself – will be able to seriously feel it.  This car chase is beyond any I have ever seen put to film.  What makes the action in the Bourne films so impactful is just how grounded in gritty reality they are unlike how extravagant and fantastical the James Bond franchise had once become.  These films are very adult in manner and context.

Jason Bourne still struggles with the remnants of his past life, and must deal with who he once was.  He must come to terms with the pain and death he has inflicted upon others in order to move on with his new life, and to absolve those he has pained of the lies that have damaged their lives.  It is powerful and dramatic.  It’s the bigger, needed step towards the further evolution of the character of Jason Bourne.  He can never live in peace with himself until he is able to come to terms with the blood he has shed.  There’s just so much to say about this film that it’s difficult to find the right words to do so.  When you see it and are able to absorb it all, you will surely understand.  It’s a dramatic and painful journey of discovery for Jason Bourne.  Whether redemption will ever come is unknown, but I believe Bourne certainly takes the hardest first step towards that end by the film’s conclusion.  However, the film ends on a sly, upbeat note, and that is a sign of very fine and consistent storytelling.  I also like the consistency and continuity here from the first film with the reuse of the same passports and identification photos of Jason Bourne to the reuse of Moby’s very catchy tune “Extreme Ways” for the end credits.

John Powell delivers another fantastic score here that tops everything he did in The Bourne Identity.  That’s just about the decree with everything here (except for the aforementioned shaky-cam / editing gripes).  Matt Damon really delivers like you’ve never seen.  Until you see Damon in the role of Jason Bourne, you might have grossly underestimated his worth, ability, and quality as an actor.  Until this point, I had only seen Damon in mostly comedic roles in films like Ocean’s Eleven and Dogma before watching The Bourne Identity shortly before the release of this sequel.  In this film, however, Damon demonstrates just how powerful of a dramatic actor he can be.  You can see emotion in his face, in his eyes, and in his body language.  Simply put, his performance is deeply human, and will hit you deep within.  As Bourne’s true nemesis, Karl Urban was very impressive.  After seeing him in the latter two Lord of the Rings films and The Chronicles of Riddick, it was refreshing to see him in a more gritty, grounded film instead of a setting of fantasy.  The character of Kirill does not have much dialogue, but Urban has a strong, intense presence that just leaves you hungering for more.  The native New Zealander does nearly all of his dialogue in Russian, and even through a foreign language and subtitles, you still get a grim tone from him that is very potent.  Both Bourne & Kirill are like ciphers when they’re in their element, but when the action gets intense, Bourne becomes more focused while Kirill becomes even more enraged.  Regardless, they are both determined to burn the other into the ground.

I also have to say that I cannot get enough of Brian Cox.  I have loved his wide range of roles in Manhunter, The Ring, Super Troopers, X-Men 2, The Bourne Identity, and now, The Bourne Supremacy.  He’s a great actor with an abundance of natural charisma and always, at least, a hint of humor.  Words just cannot explain how enthralled I am with him.  He is tough to keep up with, and if you’re going to be sharing a scene with him, you’d best be on the very top of your game.  Considering how great and engaging of an actor he is, I find it surprising that he’s said to not view any of his own work.  Whatever the case, Brian Cox is absolute pure gold in my honest opinion.

Playing opposite Cox is Joan Allen, and she is strong and stern here.  As Pamela Landy, she doesn’t allow Abbott (Brian Cox) to shovel any bull her way.  She cuts through all the crap, and gets to the truth and the core of the matter.  She takes firm control of this entire situation and handles it with confidence.  Where others in her situation have faltered and fell, she holds strong.  Even when things start to go awry, she still holds onto a degree of solidarity.  You can write a character that way, but it takes a strong female talent to bring that sort of role up to its utmost potential.  Joan Allen is that talent.  Everyone else, up and down the line, puts in everything they’ve got here, and I could not find even one moment of weak acting.  A very admirable job to everyone including those involved with the casting of the film.

The only dent in the chiseled armor of this film is the shaky-cam, fast editing style.  I believe the same level of kinetic energy could have been sustained in these action sequences using more stable photography.  If that’s how it had been shot, then I would have no problems with the editing, but when you can’t discern what’s happening in these shots, cutting quickly from one to another does not help you to comprehend the visual storytelling any better.  Of course, with just how slam-bang amazing this movie is, I just can’t allow that to be much of a hindrance to my critique of it.  Dramatically, on levels of storytelling and acting, I don’t see how anything can be topped here, but I highly encourage future filmmakers of the franchise to give it every effort.

If you loved or even just liked The Bourne Identity, I believe The Bourne Supremacy will easily exceed all of your expectations.  In the context of the currently existing three films – Identity, Supremacy, & Ultimatum – this entry is the best!  It entirely launches itself far above the potential of Doug Limon’s first film, which was an excellent film in its own right.  While The Bourne Ultimatum was not a real down slope, Supremacy was such a massive step forward that the third film couldn’t achieve the same.  Plus, Supremacy seemed more dogged and relentless in all its aspects to create a far more hard hitting film that never let up.  Also, the ending of The Bourne Supremacy with Bourne and Landy had a lot of its meaning and character building strength diluted when it was revisited in The Bourne Ultimatum.  To say it simply, this is one of the best action thrillers of the last decade, and it helped launch the genre into a grittier direction that was timely and very welcome.