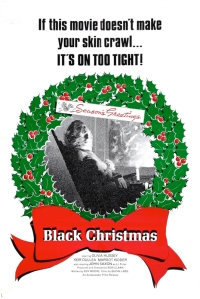 Many attribute the birth of the slasher genre to John Carpenter’s Halloween.  However, a small Canadian film from 1974 laid the groundwork for the genre and especially Carpenter’s seminal classic.  Black Christmas is likely known to younger horror fans by way of the remake that I never saw.  You do yourself a serious disservice if you have never seen the original because it is still a greatly effective piece of horror filmmaking with a collection of surprisingly notable talents involved.  Who would have ever thought that the director of the beloved family film classic A Christmas Story would have once done a Christmas-themed slasher movie?

The college town of Bedford is receiving an unwelcome guest this Christmas.  As the residents of sorority house Pi Kappa Sig prepare for the festive season, a demonic stranger begins to stalk the house.  A series of grisly obscene phone calls start to plague the residents of the sorority and soon they will each meet their fate at the hands of the psychotic intruder.  As the Police try to trace the phone calls, they discover that nothing is as it seems.

Watching this film you will see right from the start its influence.  The killer, Billy, as he refers to himself, is hidden almost entirely throughout the film through the use of a point of view camera.  Clearly, this trick would be re-used in both Halloween and Friday The 13th, but neither achieves it quite as well as Black Christmas.  That’s because of what more is added to it in terms of the killer’s psychotic behavior.  Director Bob Clark creates an amazing sense of unease with the point of view camera work.  The wide angle lens coupled with the slightly unsteady camera movement reflects the psychosis of this killer.  The completely deranged phone calls are still frighteningly disturbing.  They got right under my skin from the start, and continue to escalate as the film progresses.  The radically unhinged psyche of this deranged killer is manically on display throughout the film, and Clark wastes no time establishing the nerve-racking suspense and horror.  The fact that we know there is a crazed killer hiding out in the attic, unknown to everyone in the film, immediately injects suspense and terror into nearly every scene in that house.  I will admit, it’s been a very long time since I’ve watched this film, and damn is it still insanely creepy and effective.

Black Christmas was an especially low budget film, and so, it has a rough, grainy quality.  However, it is photographed very solidly showing the talent involved, and even then, the rugged quality of the film stock adds to the dark, unsettling tone.  The pacing might feel slow to a certain audience, but this is not a film that drags along.  Every methodically paced moment is used to great suspenseful effect, and Bob Clark knows so immensely well how to elicit these spine tingling feelings.  Each scene builds story, character, or towards the terror of the picture.  Yet, the film still features a few fine moments of levity to give it a needed contrast on a rare occasion.  It also has a collection of stunningly solid talents in front of the camera.

Olivia Hussey is a wonderful lead portraying Jess with a lot of compassion and vulnerability.  Hussey has a sophistication and warmth to hear in addition to maturity and intelligence.  This builds Jess into a relatable character to worry about on multiple levels, and she plays terrified exquisitely well.  She also does feel like a woman coming into her own as Jess deals with her boyfriend Peter.  He wants to have a baby with her, but she’s against the idea creating a troubling friction between them.  You might think this is a frivolous subplot, but it directly ties into the mystery and paranoia about the film’s killer moving forward.  Keir Dullea, most well known from 2001: A Space Odyssey, is quite superb in this very conflicted and emotionally aggressive and unstable role.  He’s very intriguing to watch as the relationship between Peter and Jess is torn apart, and begins to become a perceived menacing threat.  Dullea and Hussey work exceptionally well with one another laying out the drama between them smartly and poignantly.

And yes, this film has John Saxon.  That automatically increases its coolness factor.  I just love the authority and weight he brings with him in anything I see from him.  As Lieutenant Fuller, he’s everything you’d expect – confident, level headed, and concise.  He really echoes this performance in A Nightmare On Elm Street, but surely builds upon that.  As Fuller, he’s rock solid, just the way I want my John Saxon, but still has a moment of two of levity that is very much welcomed.

Margot Kidder puts in a surprising performance.  Sorority sister Barb is meant to be rather crass and heartless, and Kidder hits that right on the mark.  Add in the constant smoking and drinking, and you’ve got a character that is not endearing.  Yet, she makes a definite impression.  The rest of the cast is not particularly notable, but everyone does a very solid job with their distinct characters.  They make this a horror film with likable characters who you can easily fear for as lethal danger stalks them from the shadows.

Black Christmas definitely feels like a 1970’s horror film.  Beyond the aforementioned dark, grainy look and the obvious fashion and hairstyles, this film has almost a similar style as The Exorcist.  There’s very little score except in exceptionally key moments as Bob Clark uses the silent unease of the house to great effect.  The phone calls are jarring enough without overcompensating with a score.  The use of the Christmas music sets the tone wonderfully using the serene sound in an unexpectedly haunting way.  Scenes like when our killer is stalking through the house while Christmas carolers sing outside is simply brilliant.  Juxtaposing these angelic voices with a moment of suspense and violence is truly inspired, and is filmed gorgeously.

There are terribly creepy moments all throughout such as seeing just a shadow creeping into the background while Jess is on the phone with the police, or simply anytime the POV shot has our killer spying on these young ladies from upstairs.  And the shot of the eye through the door jam has become iconic and chilling as it sets off the film’s final act.  And the climax is brilliantly crafted with a great use of shadow, misdirection, and taut tension.  Just when you believe all is laid to rest, this ending gives you one final ominous moment of terror.  Wrapping it all up together, you see the brilliant touches that Clark and screenwriter Roy Moore put into this film.  In later years, it likely would’ve been a film of high body count, gratuitous sex, and little character.  However, in the same year that brought us The Texas Chain Saw Massacre, you get a film that is very well written that connects you with these characters, gives you something to care about with them, and then, set them against a very deranged and unseen killer.  It is a film of great suspense and ratcheted up tension that will leave prone audiences choked up in their seats, and wanting to turn all the lights on in the house while checking every room and locking every door when its all over.

From Black Christmas, you can definitely see evocative elements for Halloween and When A Stranger Calls.  This is absolutely one of the most influential slasher films without many people knowing it.  Maybe the influence was a time or two removed, but this was the genesis of that genre in a clearly defined form.  This is a classic that doesn’t get the recognition it so very much deserves.  This was director Bob Clark’s final foray into the horror genre, and it’s odd to see his career veer into comedy in the 1980’s, then very silly and wretchedly received kid’s films in the final years of his life.  Regardless, we will always have this amazingly effective horror and suspense film to scare us on a dark, quiet evening.  As this film’s tagline says, “If this movie doesn’t make your skin crawl… It’s on too tight!”