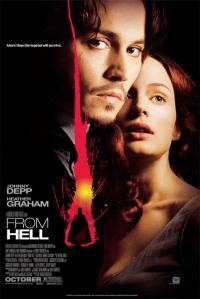 The benefit of doing Forever Horror Month is that it has forced me to watch films that have been collecting dust in my DVD collection for about a decade.  I saw From Hell theatrically at the discount theatre with a number of my friends in 2001.  I do recall general impressions and plot details from back then including a slight letdown of the film’s conclusion.  Of course, my tastes have certainly matured since that time, and so, it will be interesting to see if my opinion of the film has altered any today.

Set in London of 1888, Jack the Ripper has been running amok in the Whitechapel district murdering and dissecting prostitutes. Scotland Yard Inspector Fred Abberline (Johnny Depp), aided by his partner, Peter Godley (Robbie Coltrane), are on the case to figure out who this serial killer is and why he is killing these women in such a brutal manner. Abberline is an opium addict and when “chasing the dragon” he is able to have visions of the future, a certain psychic ability that allows him to solve cases. As Abberline and Godley investigate the crimes, they become acquainted with the prostitutes who were friends and colleagues of the victims. Abberline begins to fall in love with Mary Kelly (Heather Graham), one of the prostitutes, or as the nobles called them “unfortunates”, being hunted down by Jack the Ripper.  Abberline digs deeper and deeper into the conspiracy and attempts to solve the case before Mary Kelly is the next victim.

This was adapted from the comic book series by Alan Moore and Eddie Campbell by the Hughes Brothers – Albert & Allen.  It’s not one I’ve ever read, but the comic book visual aesthetics occasionally show through.  There are striking moments of heavy reds or sickly greens that are very stylized, and do work with the editing approach to those gruesome moments.  The rest of the film is competently shot maintaining a natural look to the time period.  The identity of Jack the Ripper is kept artistically hidden through shadows, shots from behind, and smart framing.  It doesn’t get gimmicky.  It plays scenes out with the Ripper with an imposing, mysterious quality that builds up the threat of him.  It’s very solid work from a director of photography who started out shooting Evil Dead II and later occasionally working with surreal filmmaker David Lynch.

Now, this is a genre that kind of hits me in a pleasant place.  Mixing crime drama with a suspenseful, bloody horror genre just feels like my kind of taste.  The Jack the Ripper case is an iconic one in many peoples’ minds, and this film crafts the investigation and mystery very smartly.  It incorporates some great forensic knowledge which further enhances the quality of Inspector Abberline’s abilities.  This is very important as Jack the Ripper happens to surgically remove various organs from his victims, leaving behind a sickening and horrifying sight.  While the film inevitably takes liberties with the known truth, and hypothesizes about the unknown truths, what we get is tightly and sharply crafted.  It’s a very good script realized by some richly talented filmmakers.

The production design and wardrobe departments did an amazing job.  They seem to have realized the late nineteenth century with beautiful detailed realism.  The wardrobe is especially impressive with the distinct styles given to each character.  This extends to hairstyles and the overall grooming of the actors.  It’s elegant craftsmanship through and through which gives the film its grounded texture.  The filmmakers took great care to reproduce the sights of the murders and the wounds inflicted upon the victims.  While the film lays back on its graphicness for most of its runtime, it does have visceral impact through sharp editing styles and some impressive practical make-up effects.  There is one very graphic throat cutting scene that would likely have many squirming in their seats.  As the film chillingly drives towards its climax, the violence becomes immensely more graphic and disturbing.

Getting down to the performances, I believe Johnny Depp does a very fine piece of work here.  I like the accent he adopts for the role.  Very different from the one he used in Sleepy Hollow or as Captain Jack Sparrow.  He clearly worked on the details very meticulously to bring this intelligent person to life.  While, Frederick Abberline was a real life Inspector for Scotland Yard, the clairvoyance and drug use was reportedly not true about him.  Regardless, the character that is Abberline here is given a good measure of charm and perceptive intelligence.  Depp cautiously balances out Abberline’s assertiveness with the manner of a gentleman.  While he is a man that indulges in less than respectable vices and beliefs, he is still a man that is respected in his profession.  It is an impressively strong and dimensional performance.  Depp leads this film excellently.

Depp also displays a subtle heart and passion opposite Heather Graham.  She inhabits this particularly lower class woman with a lot of spirit and compassion.  While the love between Mary and Frederick is not a major part of the story, it is developed through the building of trust and charm between them.  The chemistry of Graham and Depp is solid and genuine.

Robbie Coltrane does very well as a Police Sergeant who takes his job with a lot of serious weight.  Sergeant Godley is written well as both a consummate street level investigator, and a trusting confidant for Abberline.  It’s a very well rounded performance that instills credibility and faith in Abberline’s unconventional methods for the audience.

The highly revered Ian Holm is also especially strong as the former surgeon Sir William Gull.  He shares some solid scenes with Depp throughout the movie, and delivers a fine dramatic performance that also offers up an intimidating quality late in the film.  He really portrays all facets of the role remarkably well.  All around, this is just a stellar cast with a great depth of talent creating an array of fascinating and realistic characters.  They all make a distinct impression upon an audience.

The affluent pretentiousness of Abberline’s superior, portrayed by Ian Richardson, strikes me funny.  His assertion that no Englishman would be capable of such an act shows how much sensibilities have changed in law enforcement over the decades.  Today, everyone’s a viable suspect, no matter who you are, but back in the 1880s, an educated or even sophisticated person would never be thought of as a violent criminal.  It was preposterous.  Furthermore, his arrogance impedes Abberline’s investigation to the point of obstructing justice.  Unlike Sergeant Godley, he has little faith in Abberline’s deductive abilities.  He cares only for the perception of the investigation, not the truth that it should uncover.  It’s simply another fine detail which exemplifies the era this is set in, and what struggles Abberline has to surmount and combat to prove his theories correct.  It sets a treacherous path that he must walk to expose this gruesome killer.

Ultimately, the Jack the Ripper plotline is resolved in a ghastly psychological manner that has a sort of fitting quality.  Considering, in reality, he was never publicly, definitively identified, the ending to this has to have an air of secrecy.  There’s really no way around that.  So, it couldn’t have ended as a standard crime story with an arrest and conviction.  Still, it lacks any sort of dramatic gratification of justice.  Grisly, unspeakable murders are committed, and for an audience, it demands something equally harsh. It’s sort of a subjective feeling.  If for nothing else, this conclusion just lacks a real punch.

Again, the romantic aspect is gracefully handled, but it can get a little lost amongst the main plotline.  Abberline becomes deeply invested in Mary’s well being, but it’s more of an ancillary story.  It comes and goes in the film never really dominating the characters’ actions too much, but it does surface every now and then when it has relevance.  It possibly could’ve been developed into a fuller part of the film to have more substantive impact.  The conclusion to this story is also a little downbeat.  I’m not sure it was necessary for it to end as it did, but it’s definitely not a bad ending.

So, yes, I think my initial impressions about the film remain about the same.  It has a very good story with plenty of suspense and intelligence, but the pay-off is quite lacking.  Maybe there are those that can appreciate it more than I can, perhaps those that have read the comic book series.  There was more than enough rich talent involved making this a very well made and slightly stylish horror crime mystery.  The Hughes Brothers did a very high quality job with this material, and Johnny Depp puts in a very satisfying lead performance.  While it’s not as quirky as some of his better known roles, this is a nice departure into more serious ground that I did enjoy.  “Do I recommend From Hell?” is the pressing question.  Sure.  While it’s ultimately not as wholly satisfying as desired, it’s still a worthwhile watch for many reasons.  If for nothing else, it’s a respectably well executed moody and chilling piece of horror cinema.