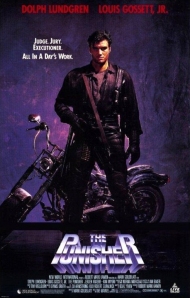 Marvel Comics had a long history of trying to get their popular superhero properties onto the big screen.  Of course, it wasn’t until 1998’s Blade that they finally achieved some success, and it opened the door to the boom we’ve had since then with X-Men, Spider-Man, Iron Man, Captain America, and so on.  However, in the late 80s, they were truly going about it all the wrong way.  Where DC had Warner Bros. backing their prospects (since they had an ownership of DC Comics), Marvel was going to low budget B movie production companies to adapt their heroes into feature films.  Many were planned, but very few got a final product.  None of them were successes, and for rather good reasons.  The Punisher might seem like an unusual choice when they had such family friendly characters to choose from, but in the era of the action heroes in Stallone, Schwarzenegger, and Willis, this does make sense.  In the right hands with the right budget, it could have been a contender.  But for those unaware of who the Punisher is, how about a brief synopsis?

Frank Castle (Dolph Lundgren) was once a cop with a wife and children until that family was murdered in a mob hit.  Faced with this horrific tragedy, and believe dead himself, he became the unrelenting, homicidal vigilante known as the Punisher.  His mission is to punish the criminals and the corrupt without mercy or hesitation, but he remains the most wanted target of the police.  Over a five year period, he has racked up a triple digit body count, and has weakened the city’s organized crime outfits.  However, this has prompted Gianni Franco (Jeroen Krabbé), one of their most powerful bosses, to come into town to take control, and bring them back to prominence.  Unexpectedly, this move has gained the attention of the Yakuza, the most dangerous and powerful criminal organization in Asia.  They decide to take brash actions to force the mafia’s allegiance to them.  Many innocent lives are soon put into jeopardy from this, and the Punisher is coxed into taking action by his sole ally and street informant, Shake (Barry Otto).  Meanwhile, Frank Castle’s former partner, Detective Jake Berkowitz (Louis Gossett, Jr), remains vigilant on finding the Punisher, and bringing an end to his blood soaked crusade against injustice.

I feel Lundgren makes for a fine Frank Castle.  He’s not the best of the lot, but he easily holds the film strongly on his shoulders.  He hones in nicely on the fractured soul of Frank, and adds some sense of self-reflection as a man seeking a reason for the injustice that has shattered his life.  He’s not just a raging vigilante, he has an emotional core that is clouded with contempt.  He’s a man with vulnerabilities, but chooses to bury them deep down beneath the hardened exterior.  On the action side, Dolph handles that with ease, and does essentially all his own stunt work.  He makes the Punisher a very practical threat as both a physically intimidating individual, and as a one man arsenal.  Visually, after dying his naturally blonde hair jet black and throwing in some five o’clock shadow, he fits the role dead-on, aside from the absent white skull T-shirt or body armor.  The motorcycle is a nice fit as well.  It re-enforces the gruff loner aspect of the Punisher, and allows him to move quickly when action needs to be taken.

The supporting cast is decent enough.  Everyone plays their roles with competent talent, but no one jumps out at an audience to make a memorable mark.  Both allies and enemies of the Punisher make the story dynamics work, and the story itself moves along with a consistent pace and balance.  Louis Gossett, Jr. probably has the most to work with as Frank’s former partner who happens to be tracking the Punisher.  He has some emotional conflicts to deal with that Gossett does a fine job with, but the focus of the film’s emotional context really is with Frank Castle.  So, the supporting cast doesn’t get nearly as much meat to sink their teeth into as Lundgren.

Jeroen Krabbé had previously played a Bond villain in the Timothy Dalton 007 film The Living Daylights, and this role as Franco is not much different.  He plays it fairly well, but he never entirely sells Franco’s stature as a high ranking Mafioso.  He’s too laid back.  I would’ve preferred a stronger character or actor that could offer a more authoritative presence.  I’ve seen some awesome crime bosses on film before that could likely leave Gianni Franco creaming his pants.  There are a lot of enemies for the Punisher to combat in this film, but no one ever stands out as a major threat for him to conquer.  No one ever appears to be more than he can handle.  It’s only ever a numbers game that tends to ever overwhelm him.

In general, the action sequences are nicely conceived and executed.  Numerous shootouts, chase sequences, hand-to-hand combat, and a few explosions make for a decently satisfying string of thrills.  At times, Frank is given the image of a stealthy, covert soldier who can get into a location with ease, and attack with swift efficiency.  That is another key for the character to pin down, and it was done well here in both concept and execution.

The story itself is sort of generic in terms that it doesn’t really adapt anything directly from the comics, and features no villains from the Punisher’s classic rogues gallery.  Partially using the Yakuza was nice, but I’ve seen the Japanese criminal outfit used to better effect elsewhere.  From what I’ve been exposed to of the Punisher, it seems that his stories work best when there’s a non-violent emotional motivation that propels him through the narrative.  What some writers don’t seem to get is that the Punisher is not just some angry guy with a bad attitude and a nasty mean streak.  There’s a deeper emotional turbulence to him stemming from the tragic, violent slaying of his family.  He has a lot of deep down pain which he cannot overcome.  Everything that he loved in life was violently robbed from him, and he can never get that back.  Since society has failed to punish these people who victimize the innocent with due severity, the Punisher will do it for us.  Frank Castle is indeed the very definition of a vigilante.  He has no consideration or respect for the laws of society.  He’s here to do what no one else can or will do, and our laws be damned.  That’s not from a jaded or cynical sensibility, but an attitude from a man whose soul has been irreparably broken by gruesome tragedy.  The best comic book adaptations are the ones that understand the core concept of the character.  The ones that understand what makes them who they are, and what aspects have made them timeless, beloved icons of pop culture.  They are built on ideals and themes that resonate with their audiences.

So, does this film hit that mark?  Decently so.  I’m sure it’s not the Punisher movie that hardcore fans were waiting for, but it hardly does anything to betray the core of the character.  Various aspects of his history are changed like being a former cop instead of a Vietnam veteran, but he’s still entirely recognizable as Frank Castle.  What we see is quite true to his more popular interpretations in comics.

Ultimately, what hampers this film is indeed the low budget.  Sets that would otherwise be big and impressive are small, dark, and limited.  Cinematography has nothing all that special going for it, especially the lighting.  Every scene is lit about the same with full, flat lighting lending nothing to atmosphere or mood.  This basically looks like a low rent television series pilot.  And while this is vaguely meant to be New York, no effort is given to even purchasing stock footage, as was later done with Punisher: War Zone, to sell that idea.  The film itself was shot in Australia.  Surely, the Punisher is the one Marvel Comics character who benefits the most from the urban environment of Manhattan, New York.  So, I feel getting the location aesthetics right is very pivotal.  Yes, that is also a knock on the Thomas Jane Punisher film.  Seriously, a black leather trench coat in Southern Florida?  I don’t think so.  Here, at least we do get gritty, grimy city streets at night to offer some contrast to the uninspired lighting throughout the rest of the feature.  The screenplay seems like it works, but the budget limits how fleshed out the concepts, tone, action, and visuals could have been.  Even then, a stronger villain would’ve elevated the quality of the movie like Frank Langella had done in another Dolph Lundgren movie, Masters of the Universe.

Simply said, it was a good try that stuck to the basics, but it didn’t have the financial muscle to make it everything that it could have been.  Nor did it have a quality director behind it.  This was the last film Mark Goldblatt ever directed, and only his second ever.  It is a good watch, worthy of killing 90 minutes with, but it’s far from being a success.  This was released the same year as Tim Burton’s Batman.  That shows the huge contrast in handing a property to a major studio with a generous budget and a visionary director, and handing it to a low budget production company about to go bankrupt helmed by an editor-turned-second time director.  Frank Castle would get another two runs at a fresh start on a film franchise, but neither would achieve what the studios needed them to.  Hopefully, the future can have better fortunes for the Punisher.