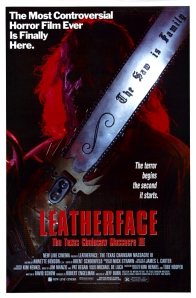 This is an unusual horror franchise in that it never really took off.  The original is a bonafide classic of extreme, gritty frantic madness.  From there, it went in all kinds of sporadic directions never really settling into a consistent style.  The first sequel ventured off into quirkiness, and the later sequel disregarded continuity entirely creating what is considered one of the worst films you could ever fear to endure.  This entry was a little more stable in line with slashers of the era as it came from New Line Cinema.  They honestly had a good approach that would make the franchise accessible to the general horror masses, but not laying back on the blood letting.  However, this was the age where the MPAA was striking back at gory horror, and hacking and slashing the films down to extremely tame levels.  The volume and style of violence in this film is comparable to any gory horror film of the last decade., but in 1989, this was threatened with an X rating (prior to the introduction of the NC-17 rating).  Goes to show just how inconsistent the MPAA has been over the decades.

It has been several years since Leatherface last terrorized the Texan backwoods with his Sawyer family, but that doesn’t mean he hasn’t continued his cannibalistic ways.  In fact, Leatherface has been “adopted” into a brand new family of crazed Texan cannibals.  The film begins with an effective scene of Bubba “Leatherface” Sawyer (R.A. Mihailoff) sewing together a fresh mask of flesh while one of his victims attempts to escape, but gets gutted with a chain saw instead.  From then on, we follow the eventful journey of siblings Ryan & Michelle (William Butler & Kate Hodge) as they drive from California to Florida to deliver a car to their father, but they’ve just entered into the desolate Texas landscape.  As they drive into the night, Texas state authorities are cleaning up a hazardous mess of bodies which have decomposed into toxic material – remnants of past Sawyer family massacres.  The brother and sister pairing drive into the next day and a gas station where they encounter a hitchhiking cowboy named Tex (Viggo Mortensen,  The Prophecy, The Lord of the Rings) and the wild-eyed store owner Alfredo (Tom Everett).  Tex gets friendly with Michelle and Ryan, to a lesser degree, but the cordial moment is cut short when Alfredo pulls a shotgun on the threesome, and the siblings haul ass out of there, watching Fredo blast away at them and Tex.  The two siblings quickly take off down a deserted road, but soon find themselves stalked by Leatherface and his new cannibalistic and homicidal family.  Ultimately, their only hope for escape is in Benny (Ken Foree), a survivalist who not only has the firepower, but also the training to take down the entire psychotic family.

To start off, this was a very troubled production.  I can’t even begin to list the ways, but let’s just say that the film was so excessively violent that the repeated runs through the MPAA forced the release date to be delayed from early November, 1989 to January, 1990.  At one time, director Jeff Burr was fired on Friday and re-hired on Monday.  The shooting schedule was rushed, and the budget was tight.  Also, I would have to say that calling this a “massacre” is false advertising as only two people outside of Leatherface’s adoptive family are killed in this film.  There’s a lot of violence, but not a lot of death.  Although, despite all this, Leatherface: Texas Chainsaw Massacre III is quite a good film.

The cast is solid, very solid.  There are no amateurs here like in many slasher films.  R.A. Mihailoff was an experienced stuntman at the time, and did a great job as a slightly more evolved Leatherface that is more focused in his mayhem than before, but still remains very youthful in mind and impulsive in action.  He was also one strong dude having to lug that HUGE 80 lbs chain saw around almost everyday.  William Butler had some previous experience in slasher flicks, but this was his most featured role and he does well in it.  As Ryan, he’s a bit pensive and uneasy trying to deal with heavy situations.  Of course, Viggo Mortensen delivers an entertaining and intriguing performance as the crazed Tex with a bit of an odd cross-dressing undertone.  He pulls off the insanity and the charm very well, and proves to be a solid and impressive actor more than a decade before The Lord of the Rings made him a household name.  Viggo was a great actor that existed under the radar for a long time before that big break, and even this early on, you can see his quality and versatility.  Tom Everett really fits perfectly as the wild-eyed, fidgety, and probably schizophrenic Alfredo.  Definitely a classic character for these films.  Dawn of the Dead alumnus Ken Foree brings a lot of energy and a decent amount of humor to the role of Benny.  He truly endears himself as the hero of the film whereas there are usually only perilous heroines.  Benny gets to kick some ass, and really give our psychotic villains someone to tangle with.  Also, with the character being an armed survivalist, we get some nice action scenes and fiery moments.  Definitely a worthwhile and enjoyable character.  Finally, there’s the female lead in Kate Hodge.  She really rates high as Michelle among the other female leads of the series who go through maddening events and experiences, but this time, she doesn’t breakdown into a traumatized pile of emotional goo – so to speak.  Michelle comes out as a far tougher character, and proves that she might not only survive, but also endure in the aftermath of this Texas Chainsaw Massacre.

KNB EFX have been an industry leader in special make-up effects for a long time, and this is another excellent example of why.  The MPAA would not have so much an issue with the gore level if Kurtzman, Nicotero, and Berger weren’t so amazingly good at their jobs.  Everything has such detail and texture to really drive home the squirming realism of the graphic violence and trauma that characters are put through.  While the film itself might not be very highly regarded, the effects work here should be given high praise and special notoriety.

Cinematographer James L. Carter gives the film a very strong look.  Personally, I see a resemblance in the visual tone of this film and Jason Goes To Hell, despite having different cinematographers.  Both films have a very dark, dense landscape at night with a tinge of blue that makes these two films look very similar.  It adds a more grounded, hardened look to the filmed imagery.  The filmmakers wanted this to have a real horror feel, and maintained a gritty look throughout that really enhances the horror aspects entirely.

I believe Jeff Burr did a fine quality job despite the turbulence of production. He crafted a film that probably shouldn’t have turned out nearly as good as it did.  The screenplay was well-written by David J. Schow in his first break.  While he had been writing material for a long while, this was the first script of his to get produced.  Although, he hasn’t had a wondrous career with a couple of Critters films, an episode of The Outer Limits, and two episodes of Ridley & Tony Scott produced anthology series The Hunger under his belt, but he did deliver us the screenplay to the cult classic The Crow.  So, he is highly capable of delivering brilliant work, but hasn’t had the rich opportunities to demonstrate that much.  All in all, he did a good job here with probably the only consistently worthwhile TCM sequel.

I’m not giving this a great endorsement because it is almost perfectly formulaic for a Texas Chain Saw Massacre film, but it’s the characters where this movie holds strong.  The story is mostly a direct template from the first film, but the characters are more original than the story.  There’s also more suspenseful and intense action than before or since.  Also, I like this design of Leatherface the best, and who can resist the massive chain saw given to him with the phrase “The Saw is Family” engraved on the side?  Mihailoff’s representation of old Bubba Sawyer has a lot more aggression and coordination than before.  Kate Hodge brings a much stronger and tougher heroine to the series, and I can’t help but enjoy every role I see Viggo Mortensen in.  Plus, there is an entertainment factor here beyond the terror, but it never overwhelms or damages the integrity of the horror elements.  So, I do recommend this film to anyone looking for a hardcore slasher film with a healthy dose of gore and action.  The DVD that’s been available for a long while has both the theatrical R-rated and full unrated cut of the movie.  It’s always been nice how New Line Cinema was generally comprehensive about those things, but any true horror fan would likely never mind the censored version, anyway.  Considering the sporadic quality of this franchise, I feel this entry is among the most accessible, sensical, and satisfying of them all.  As for the remake and prequel?  I do have reviews for them, but I’m saving them up for the September / October Halloween season.  A long way to go, but I’m definitely saving the meatiest horror reviews for that part of the year.